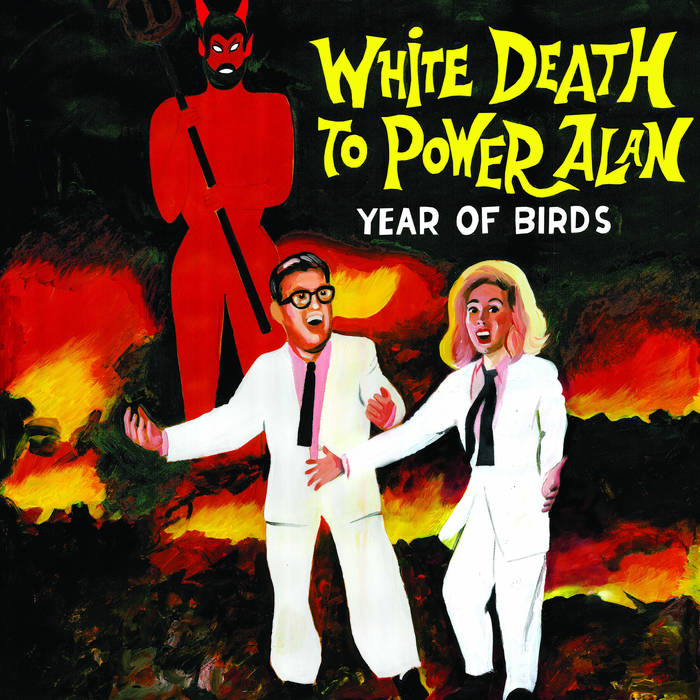 After a few years to wade through a jungle of different format publications, from tapes to CD’s, 12 “, 7” and many downloads, the Teesside post-punk outfit, Year Of Birds, are now out with their new album “White Death To Alan Power “as a three piece. Actually the band is composed by Oli Heffernan (King Champion Sounds, Shrug, Detective Instinct, Houseplants, Ivan The Tolerable) – bass, vocals, guitar, organ, Danielle Johnson (King Champion Sounds, Witch Hands) – drums and Paul Coates – guitar.
Just place the pick-up on and you are overwhelmed by the rich world of talent late ’70s – early’ 80s, a period of experimentation supported by courage and daring.
The same temerity and effrontery to “Western Splits (After Lear)” that opens the dance with martial rhythms, dissonant guitars dueling with relentless bass to merge into a sound where happily coexist Birthday Party and Fall.
“Benefits Mix” still beats Mancunian blood, the guitar is a radio signal, the filtered voice, the rhythm section creates a flammable carpet where seems to waft the voice to the test of tonsils by Mark E. Smith.  They are not new sounds, but still bold. It was thirty years ago and are now also because many young listeners have never heard them. Are great sounds, rich in pathos, which could even annoy or scaring today, after so long, sounds living of guitars battered with picks lined with sandpaper, the cruel drums and sewn by a bass which is proposed as a kind of general glue of a changeling sound, the kind of improvisation dear to Captain Beefheart and His Magic Band which sometimes peeps through the grooves.
“Brick By Brick” has a punk urgency, the voice declaiming, a furious bass, an acetone organ, the guitar explores a few centimeters of his neck, but the notes insist frantic and glacial.
“Cubists” could very well draw from both the earliest Gang of Four  and Siouxsie and the Banshees of “Join Hands”, the melody is drawling, the tired pace barely sustains the blues lament that characterized the song.
The album was recorded in a practice room and spare bedroom with a £ 30 microphone Because, as Heffernan points out, “I do not see any difference between a band That has spent two months and Thousands of pounds recording a song and getting it perfect , to someone who’s stuck a microphone in their kitchen and bashed out a song in five minutes – Whether you like it, or hate it – they are both, in essence, the exact same thing – a recording of a song – I know are Therefore as valid as each other. “

It is and industrial blues record, of punk joined with the syncopated sounds of funk, heavy post-punk and new wave drifts, kraut influences, all held together by a healthy desire to explore new paths using old instruments.
It is an album that grows, and many more, with each listen.