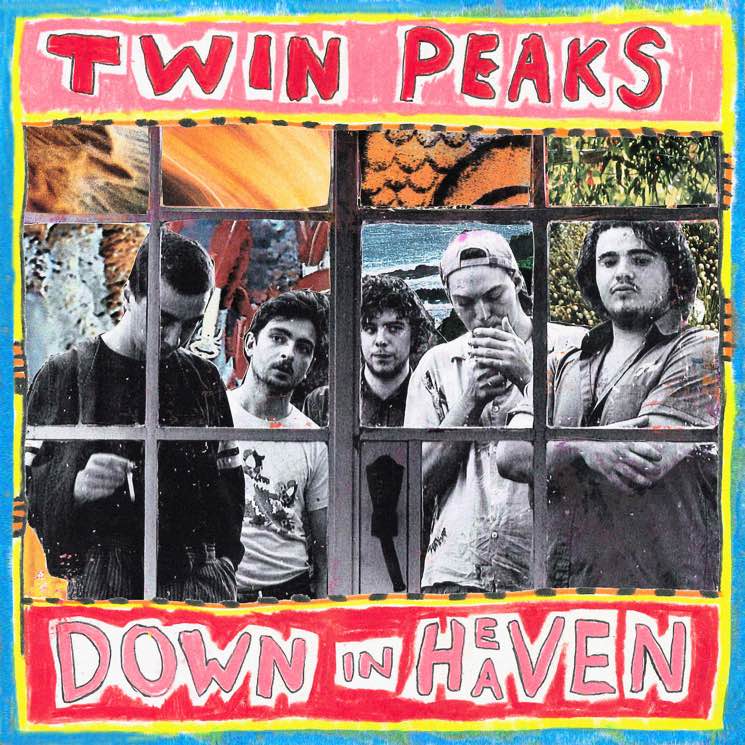 On their third LP, Down in Heaven, Twin Peaks hang on to their rough-and-raw disposition while drawing sonic inspiration from favorite albums of 1968, including, per press materials, works by the Rolling Stones, the Kinks, and the Beatles.
Bolstered throughout the album by the addition of Wild Onion co-producer Colin Croom to the lineup on keyboards (notably organ), the era, if not a specific year, is resurrected from the moment the needle hits vinyl with the sassy, T. Rex-grooving opener “Walk to the One You Love.” Parts of the record capture the more reflective tone associated with the late ’60s, such as the regretful, even-tempered “Holding Roses” and the brass-embellished “Lolisa,” which could almost pass for an unreleased, post-“Penny Lane” British Invasion demo. The most prevalent personality of the album, though, is that of loose and sexy, post-“Jumpin’ Jack Flash”-period Stones. Tunes like “Keeping It Together” and “Cold Lips” offer Jagger-esque vocals similar enough to inspire bedroom-mirror impressions. Elsewhere, even slower tunes like “Wanted You” and “Stain” still flutter with restrained impulsiveness, filling spaces with guitar interjections, hooting backing vocals, and expressive percussion. The sparse yet jaunty acoustic-guitar tune “Heavenly Showers” staggers down a brick-laid alley rather than resting on a stoop (“And I woke up in my bed/And saw the books and the records and the booze/And I shook the thoughts of love from my head/And in the shower started singing a tune”). Meanwhile, treats like “Butterfly” and “Have You Ever” throw the ’60s into Twin Peaks’ distinct twist on contemporary garage punk.

If on average more reflective and restrained — though here these terms are all relative — established fans will be glad to know that Down in Heaven still carries the torch of garage rock, and anyone who misses the free-spirited, clattering style of those influences has a generous 13 new tracks to enjoy.