West Coast natives Mike Brandon and Luis “L.A.” Solano have been tweaking their version of fuzz-toned garage and psychedelia since their high-school days in Salinas, California. Over the years, the Mystery Lights underwent a number of lineup changes and a cross-continental relocation for their founding members before settling down to work as a New York band, marrying city grit with classic garage fervor. With a handful of EPs and one full-length behind them, the retooled lineup eventually found home on retro-minded Daptone’s rock imprint, Wick Records. In fact, the Mystery Lights are the label’s inaugural release, and from the sound of their 2016 self-titled LP, they’ve landed in the right spot. Tonally, the album is a bit of a time capsule as the Lights go whole-hog down the Nuggets-era rabbit hole. The chirping Farfisa organs, the biting reverb-soaked riffs, and Brandon’s rasping yelps all feel unearthed from some mid-’60s vault. After an instrumental fanfare of an intro, they make their opening shot with “Follow Me Home”, a gritty, minor-key rocker with some solid group call-and-response backing vocals and enough sweaty menace to mean business. With its snaky organ and stuttering vibrato, the midtempo “Candlelight” dances around another nice minor-key melody before revving up into a frantic freakout in its latter half. 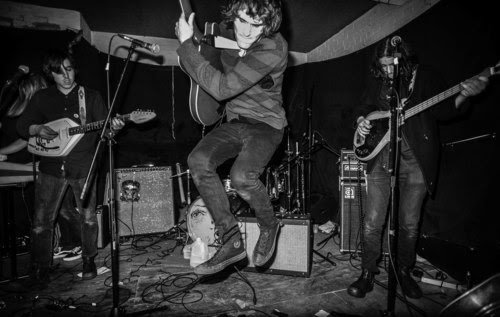 The Mystery Lights definitely give off the feeling of a wild and even dangerous live band, but on record things begin to run together after just a few tracks. In replicating the sound and style of their 1960s heroes, they’ve checked all the right boxes, but there just isn’t enough quality material here to help distinguish themselves from their influences. The music is vigorously played and faithfully captured, but the Mystery Lights’ identity seems a little too lost in time.