It would be misleading to label The Cult Of Dom Keller as Heavy Psych Schorcers. This third album is characterized by stained hypnotic textures of Gothic taste, a sound that does not disdain concessions to experiences as the ones  made by Pink Floyd and post punk solutions covered by Joy Division and Bauhaus.
The quartet from Midlands chooses the path of impervious experimentation rather than the easy Heavy Psych consensus at any costs that, after years of repetition, might sound obvious to the ears of most.
They are dedicated to the construction of this sound with an attitude almost monastic, spiritual, with dedication and without any distractions. They have accentuated the mantra side and exasperated the drone experiments of their music, creating a work supported by arabesques of minimal keyboards, discrete and intense.

Sometimes, as in the opening of “Hole In The Whole”, we have carried on the emotional ups and downs of liquid and serial echo sounds, dreamy vocal harmonies, almost paradisiacal, mindful of the lessons of Ian Curtis, with sudden cruel fuzz guitar soluitions, bloated, short and hot, in the queue to the song.
The Cult Of Dom Keller can make a lot of noise, you know, but if I have to indicate the mood of this work, then I have to admire the courage of the risks taken by making a series of fascinating songs that act on a spiritual level rather than causing headbanger as a result of the thickness of the noise violence. A liquid sound and hypnotic experience that you almost deceives so sneaky, a mantra that captivates you gently as the siren song in which it is nice to get lost. 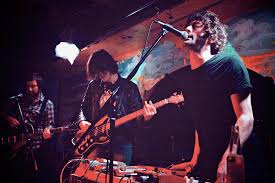 “Broken Arm Of God” is literally full of fuzz guitars. A real fuzzy architecture. Tons of fuzz  beyond the saturation, strings that vibrate almost on contact with the air. The band confessed that, in this song in particular, were trying to sound like a volcano about to erupt an atomic bomb and the bass and the guitars were so exasperated by breaking three amps in a single afternoon.
The battery is full of effects, almost unreal in the distance but this, suspended and heavy, percussive oxymorons are functional to the realization of a sound capable of becoming a sinuous and captivating way. Sometimes, when it is metallically monotonous, it seems almost hearing the old Doktor Avalanche of the Sisters Of Mercy. The guitars are not, in principle, bulky, although always present, like a cheetah crouching in Savannah, waiting to take the jump on its prey. Discrete guitars, stabbing, the exasperated notes, almost oblong, circular but always placed a disciplined, with whimsical geometry precision, within the general framework of a music deeply addressed to scan more intimately deep and dark parts of our souls.

The album basic feeling is that of a bright interior power, restrained, as if he could implode at any moment in a sound stream of consciousness, moderately ossianic and able to scratch the shell of the listener through a Socratic process, stimulating sensations that would have remained dormant if subjected to the usual therapeutic sonic assault.