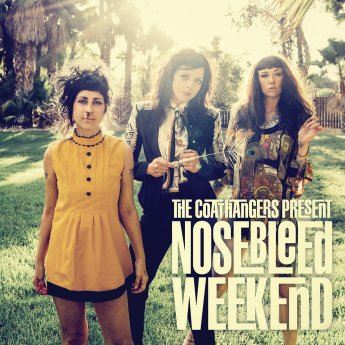 On their fifth album, 2016’s Nosebleed Weekend, the Coathangers have shaken off the reckless amateurism that marked their early recordings. If they don’t sound “chops intensive,” by now, there’s no question that these women can play their instruments with agility and enthusiasm. And there’s less punky abandon and more solid, straightforward rock & roll on Nosebleed Weekend, though “Squeeki Tiki” and “Watch Your Back” prove they’re still in touch with their inner troublemakers.
On this album, the Coathangers continue the deliberate move away from their snarky origins that began with 2014’s Suck My Shirt. If their rock & roll is still on the minimal side, it’s delivered with capable skill and a sense of drama. And “Perfume,” “Excuse Me,” “Copycat,” and “Down Down” all sound moody enough to suggest the band is not afraid to take their music seriously, and maybe not even themselves, either. Drummer Stephanie Luke has added a bit of swing to her rolling and pounding style; Meredith Franco’s bass work has developed a strongly melodic throb that’s more than welcome, and Julia Kugel’s guitar ambles back and forth from crunchy buzz to Morse-code single-note patterns that give the songs a welcome texture. Some fans may bemoan the lack of raucous humor on Nosebleed Weekend, but if this represents a more mature version of the Coathangers, the songs still display flashes of wit and this material rocks. And Nic Jodoin’s production is simple but captures the performances with clarity and punch. If calling Nosebleed Weekend the Coathangers’ most professional work to date sounds like damning with faint praise, it admirably confirms this band isn’t messing around.