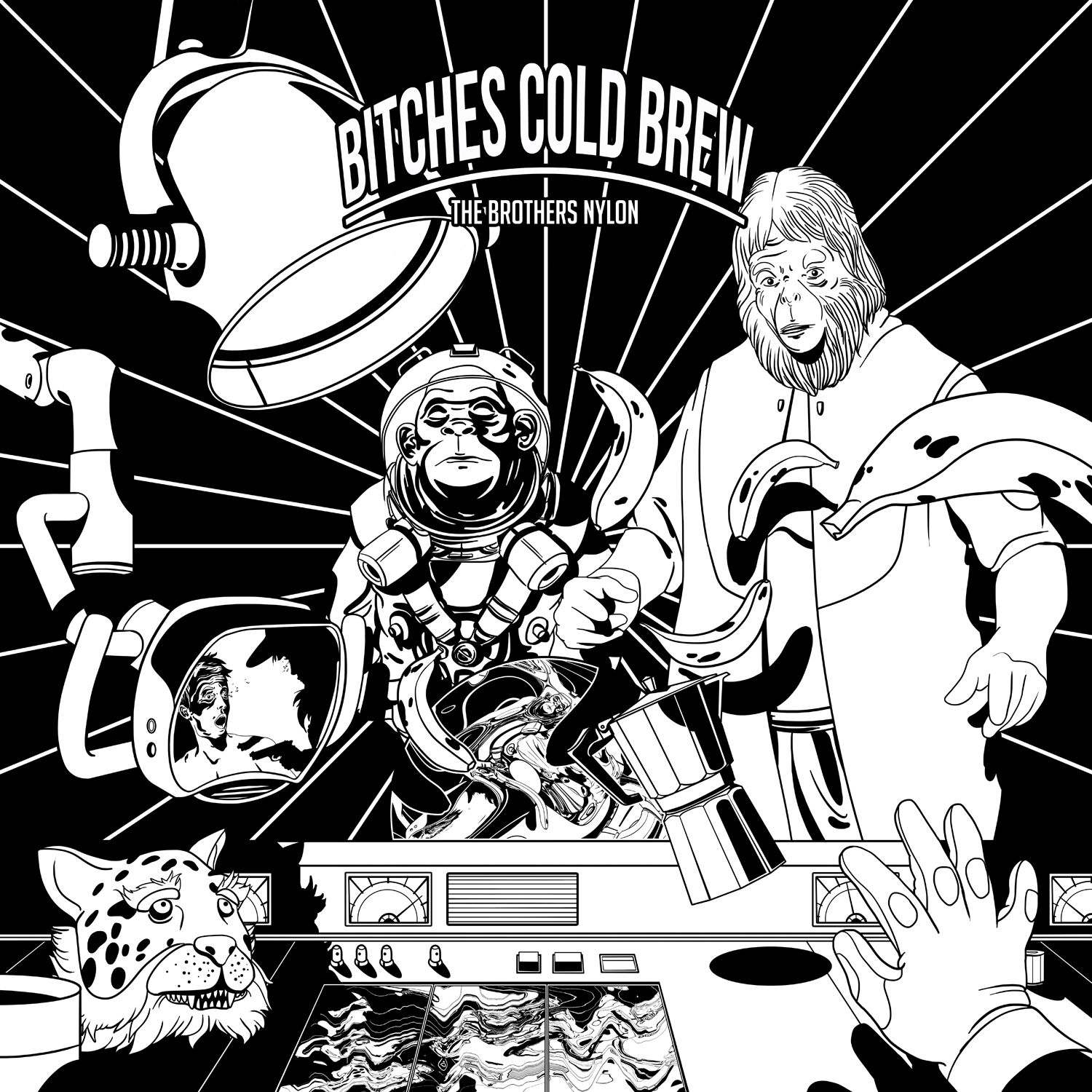 The “Bitch Brew” by Miles Davis has now cooled, printed in the Universe in fiery and indelible letters, but it is again brew time, a cold brew full of infecting killer grooves giving us a relief from the dray days will come. The Brothers Nylon is a crazy collaboration of brothers Nick (guitar, bass, keys, vocals, strings, horns and percussion) and Mike (drums, percussion, vocals and mixing) Rufolo, from New York, and the talented and irrepressible London-based Shawn Lee, author of soundtracks for films and video games, as well as numerous very interesting release records on labels like BBE, Wall of Sound and Ubiquity and some others.
“Coffee Shop”, “Couscous”, “Hot Sauce” and “Local Fruit And Veg Emporium” prepare the table of this hard lush, then throw the food in the washing machine, maximum spin speed and so bring out the new stock, updated and contaminated with all viruses and bacteria that can pick up our planet.
“Coffee Shop” is supported by a blend of countless influences, a soul that gathers light flavors that result in free jazz sounds and atmospheres from East Europe, fanfare Ciocârlia struggling with the first vaguely psychotropic experiences, the Shawn’ wicked falsetto, the music libraries lost in the breath of crazy big band, accelerations that crumble into spirals of sounds and then set off frantic.
“Shove It In My Mouth” is full of Blaxploitation charm, “Girls Just Like To Party” is ominous twang of guitars and cinematic insights from B-movies and white jazz solutions.
The album was recorded in New York by the brothers Rufolo using an historical tape machine, and then sent to Shawn Lee in London to be enriched and developed.
The artists have never met each other and the songs have always traveled via e-mail. This method of composition has probably stimulated the creativity, releasing the brakes of the daily confrontation to come to a sound rich of dirty funk and big beat. A sound that lives in a border land between Captain Beefheart and Bootsy Collins, including Frank Zappa and Money Mark and has honorary citizenship in the Mo ‘Wax catalog.
It’s a mixture of semi-famous riffs, Library Records, obscure songs and flea market diggers.
The topic range is pretty wide from Khaleesi, mother of the dragons, to the invasion of selfie stick, from the good reason to visit San Francisco to the declaration of cous cous way of life.
Bitches Cold Brew is still pleasant and despite push on the accelerator to throttle the free creativity, maintains certain homogeneity of the bottom which grants it the marks of rational work, designed and realized by achieving the goals established from the beginning.
Are you ready for the multi instrumental big band multitrack madness?