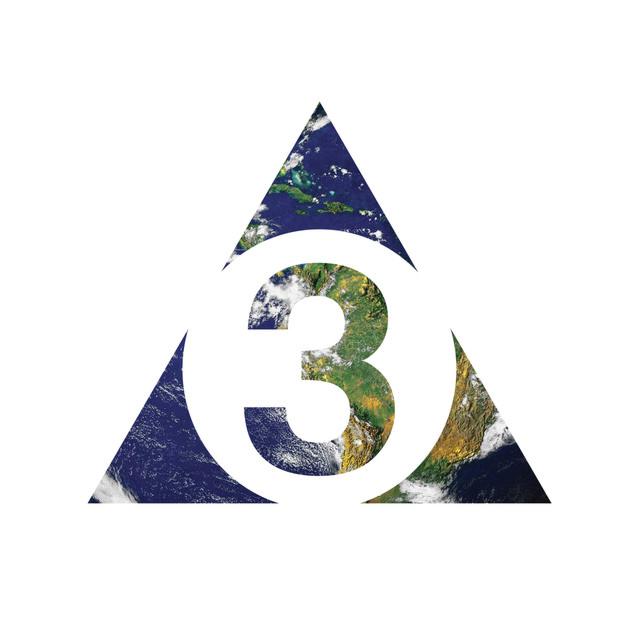 Frankly, I read a lot of reviews of the last release by Anton Newcombe and the other guys, and I’ve sincerely noted since now that in most cases people wrote almost the same things, intending ‘Third World Pyramid’ (out last October via A Recordings) like it was just another chapter of their discography and in this sense, also assuming the greatness of this artist and how many BJM have been and are still now influentials into the psychedelic genre and the world of music generally speaking, as it was not determining about the quality of the sound of the band. A few really tried to get into the real contents and to speak about the music, proposing just the ordinary standard model review which we are used to read about artists who have of course nothing more to demonstrate and for this reason it’s used to assume it was like they were no showing new ideas into their works; in other cases just talking about the same old bullshit. You know, I’m talking about the ‘Dig!’ documentary by Ondi Timoner and the way people intended it and pretended to consider Anton (he himself never watched it) and The Brian Jonestown Massacre. 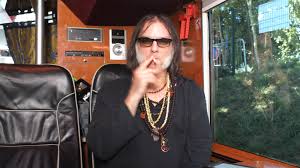 The truth, on the other hand, it’s that this last album, actually the 15th full length release by the band and fully recorded and produced at Anton’s Cobra Studio in Berlin, Germany, despite the fact it has inevitably some similarities with the previous LP, ‘Revelation’ (2014), has got into its music some innovations which possibly started a new era in the story of The Brian Jonestown Massacre, a part than of course an its own conceptual and ideological content. In this sense, ‘Third World Pyramid’, which the cover looks evidently a lot similar to the logo by the Spacemen 3 (why not – we are talking of course about one of Anton’s fav groups), it’s possibly the much more political by The Brian Jonestown Massacre. A records which it’s actually really into the current social and political situation and which the title wanted to be a reference to the abstract comparison between multi-leved structures like they were pyramids of Babylon’s ziggurats (which on the other hand are all of them located in the so-called ‘third world’) and the contemporary society, which it’s evidently multi-leveled and in this sense iconographically possibly raffigured as an human pyramid, where people are actually separated into different blocks so that it’s impossible because of this separation to make them working together for the same proposals. An hard consideration that, in a particular moment like this one, it’s possibly much more actual than it was a few months ago. Even prophetic, also if we have to consider that of course story always has got its course and nothing happens just for a case. And a consideration and a concept that of course pretended to get as a consequence an album in which the tones show as Anton himself declared, ‘a full spectrum of human emotion’, as he always intend to never be melancholic, desperate or even catastrophic, but a real and lucid critic of nowaday society. A true man of his time. 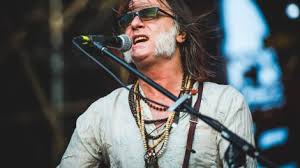 A part than this, talking properly about the music, we know that Anton and The Brian Jonestown Massacre arrived to this new release later what we could define a very particular phaase in the story of the band. Many events followed the release of, ‘Revelation’, and everyone of these had with evidences conditioned the sound of the new album, since from the redefinition of the band in its own ensemble and inevitably to the composition and the modulation of the several songs contained in the album. The group in fact overcame brilliantly what someone would had defined as a transition later the departures of two historical members of the band, guitarists Frankie ‘Teardrop’ Emerson and Matt Hollywood. As a consequence a new guitarist, Ryan Van Kriedt of Asteroid #4 and Dead Skeletons, joined the band, giving to the sound a different taste and this not only because of his technical skills but also because his own peculiar style and that evidently perfectly combined with some considerations Anton made previously about the sound itself of The Brian Jonestown Massacre (he considered there were too much guitarists) and possibly also about its role into the band as a guitarist during the period he worked and toured with Tess Parks.
All of these things stayed actually at the basement of the making of the album and of what apparently, also standing at some considerations made by Anton himself and I reported on an interview I had with Ricky Maymi last year, it’s a great moment of the band, which in the lass of time between ‘Revelation’ and ‘The Third World Pyramid’ released an Extended Play (not mentioning the LP, ‘Musique de Film Imaginé’ of course), toured two times US and Europe and one Australia. Guess, I don’t remember exactly, they also performed live in Tokyo, Japan. In any case, they weren’t playing so much live for a very long time and possibly Anton, who is always be very prolific of course, but who is now really having a good phase in this sense, considering also the fact we are now next to the release of a new LP, next February (‘Don’t Get Lost’), which it’s possibly goint to be, ‘amost kraut-rocky, PiL Limited steel box, dubby, dystopian’, and that will be anticipated by three singles out in the next days. 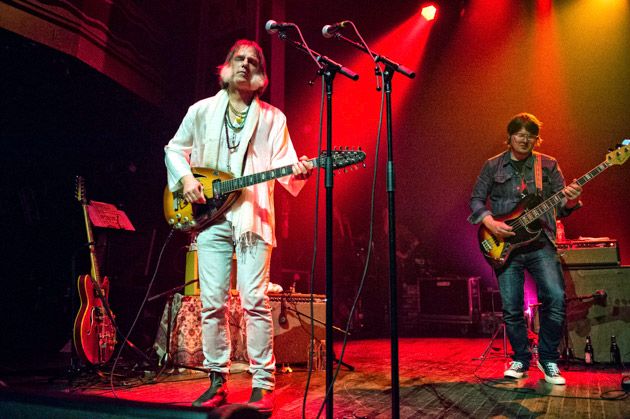 Anyway, sincerely, since from the first track, how could this album be defined as something redundant and no adding anything new to the sound of this band? There’re, of course, evidences of what we could define The Brian Jonestown Massacre typical ‘mark’ ( ‘Like Describing Colors To A Blind Man On Acid’ sounds rightly like you would pretend a song by The Brian Jonestown Massacre have to sound), but how could it be different if we are talking about an imprint that on the other hand we actually recognise even on the several bands which have been inspired by them. ‘Good Mourning’, the first track, it’s a solemn acoustic psychedelic folk song, an irregular monotous tone, an evocative lullaby sung by Anton’s wife, artist and photographer Katy Lane, with her lamentous and almost desperate voice with arrangments which has got roots in some moments of sixties folk psychedelia like (thought about Donovan or Vashti Bunyan, despite the fact here tones are much more melancholic in what apparently it would be a sort of Nico’s style). With ‘Don’t Get Lost’ and ‘Government Beard’ and the title-track, ‘Third World Pyramid’, the band possibly reprises what were the same sonorities of ‘Revelation’ and of the EP, ‘Mini Album Thingy Wingy’ and what it’s possibly the actual main BJM’s kind of sonorities and what in a the review of the mentioned EP I defined as sonorities which are conceptually Hellenist, an actual realisation in music of an Aristotle model and where as the Greek philosopher and scientist intended the universal needed necessearly to be predicated to objects, the sound is the consequence of concrete considerations about the world and also about the story of music and humankind thinking from the beginning of history to nowaday. Inevitably mixtures of western psychedelia are combined with triumphalistic echoes of the fanfares acclaiming the greatness of Alexander entering into the City of Babylon the Great and fuzzy guitars and heavy usage of synths immersed the listeners into a state in which we could actually contemplate the rising of the various and multicolor beauty of the hanging gardens. An imagery which actually reach its climax with the coverage of, ‘Assignment Song’ by Nina Simone, that here got a dreamy and psychedelic redefinition with an opening which could evocate the tones of another famous cover recorded by the band in 2001 and contained in the studio album, ‘Bravery, Repetition and Noise’, ‘Sailor’ by The Cryan’ Shames, and in a more than nine-minutes longer emotional crescendo to the organ instrumentally ending evocating the Pink Floyd of the early albums, when Syd Barrett was still in the band. A style later reprised in my opinion also in the last track of the album, ‘The Sun Ship’ (also released as a single), that actually sounds in a very sixties UK psychedelia mood, despite what I considered as a garage attitude that on the other hand it’s part of the genetic heritage of the band. 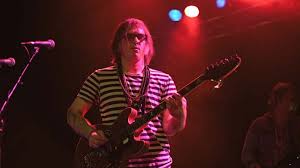 Cinematic instrumental episodes succeed in the track, ‘Oh Bother’, where synths sound like trumpeths and as bands connected to The Brian Jonestown Massacre (and they themselves are used to do in other occasion of course), like Federale (captained by The BJM bassist player, Collin Hegna) or Spindrift, the song is willing to be a western movie theme or even a noir song out from French movies like the ones Anton wanted to pay homage with the album, ‘Musique de Film Imaginé’, where he wrote what was actually a soundtrack for an imaginary French film of the late 1950s and 1960s directed eventually by Francois Truffaut or Jean-Luc Godard. ‘Lunar Surf Graveyard’ could also be intended as another episode of celluloid soundtracks but in this case atmospheres are less aggressive than on the other track and the song is mainly constructed on arrangments of twists of guitars combined together in a tragic memorial of what it is possibly the European continent itself, the place where Anton Newcombe decided to live, in what it is possibly its Capitol City, Berlin, wanting to consider himself completely immersed in this dimension and what he could actually be defined as a ‘bohemian’, practicing an unconventional lifestyle and being involved in musical and artistic projects and movements. A wanderer and at the same time a consciounsly artist and citizen of the western world, considering this not as a monolith, but, farthest from any possible iconoclast devotions, absolutely determined to dismantle or better to solve that Rubik’s Cube, this multi-leveled and multi-faced ‘Third World Pyramid’ which it’s actually our contemporary society.