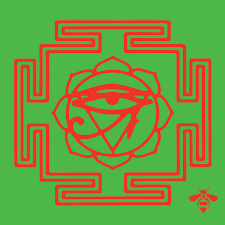 Anton himself in a recent interview, announcing the the forthcoming release of the double album, ‘Don’t Get Lost’ (out in February), admitted that it is in practice an ‘indefinable’ record. Like a UFO! Something he discovered and he simply recorded spontaneously, walking inside the room and starting pressing buttons to literally work it out how to fly it. Defining in this sense a line of separation between the new album and the previous one, ‘Thid World Pyramid’ (out last October), he claimed this new one is going to be eventually much more experimental and inspired to kraut-rock sonorities and kosmische experiences, intending perhaps also referring to some disturbing episodes of science-fiction imageries. Possibly as consequence a new frontier overcome by one the most influential musician of the last thirty years and by a band that’s actually become much more than a cult, despite this kind of definition would be considered as a limit by Anton and the other guys themselves, considering the fact they are always trying to get in touch with the reality around them. On the other hand with ‘Third World Pyramid’ Anton made possibly what it was fundamentally it’s much more ‘politic’ album. Not that he was before not considering about the society we are actually living in, but conceptually he had in practice truly and deeply concerned about what’s actually defined as ‘the western world’ and how it is actually ruling the whole world and relating to the rest of the countries. His speculations of course were farther than being only expressed in terms of interviews or because of the lyrics. He defined himself a bohemmiene, he wanted, pretended to be a relevant artist and not only well-known for being a rock’n’roll great musician, because he is yet a great and influential rock’n’roll musician and The Brian Jonestown Massacre are yet acclaimed as one of the greatest and fundamental psychedelic group of the last thirty years at least. Anton wants with his music really make a revolution into what are actually the musical schemes and also the way music it’s actually spreaded and publicised world-wide. It’s notorious the fact he made heavy declarations against Apple Music, he recorded and produced a masterpiece as ‘Thank God For Mental Illness’ on 1996 with the budget on only 17.36 dollars, he is always going to spread his music by YouTube and he doesn’t absolutely give a fuck about if you’re going to listen to what we usually define ‘demo recordings’ and that for him are in practice in any case just ‘work in progress’. Because he is always working on new music. So… Not strange if, ‘Don’t Get Lost’ will be anticipated by three singles, which the first one is this vinyl 10” out on January 13th via A Recordings and containing two songs: ‘Groove Is In The Heart’ and ‘Throbbing Gristle’. Both of them recorded by Anton himself with Andrea Wright and mastered by Shane McEnhill, the songs saw the renewing of Anton with the singer and songwriter Tess Parks, in practice one of his ‘pupil’ and a performer who is apparently going to increase more and more her skills as singer with her fascinate decadent and bluesy Jim Morrison’s sixties psychedelia style, and in any case a new step into what we could define a space and experimentalist noise dimension. Much more bluesy and reverberate hipnotic psychedelic ‘Groove Is In The Heart’ as much is completely a fuzzed and schizofrenic noise mantra ‘Throbbing Gristle’, the 10” is a first taste of what we have to expect from ‘Don’t Get Lost’. An electrified earthquake, a 13th Floor Elevators’ new millenium shake, deep vibrations and echoes without time and space, a come-back of UFO’s on the Earth without the processing of any fucking worldwide conspiracy theories. They’re among us. They’ve always been here.