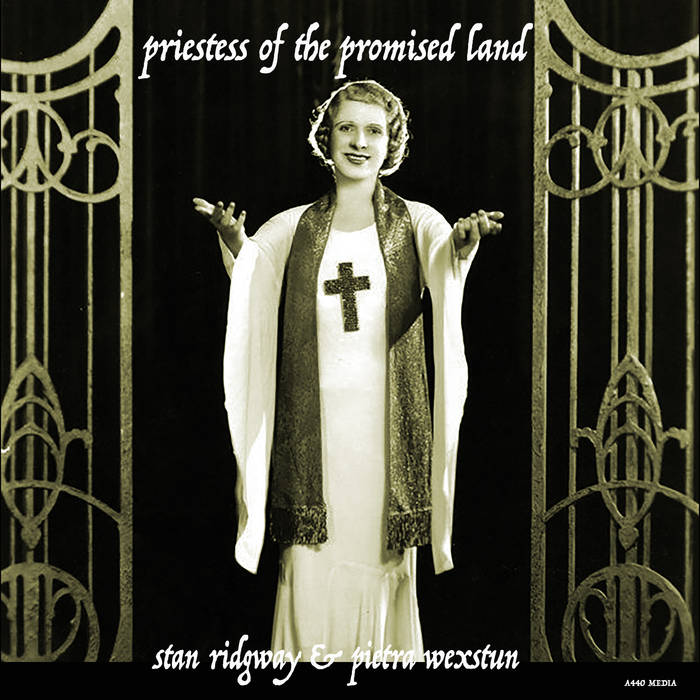 If we except his first solo release, ‘The Big Heat’ (1986), Stan Ridgway‘s solo production later he departed from Wall of Woodoo in 1983 (an year after the release of the masterpiece, ‘Call of the West’), it’s not generally taking much into consideration by the majority of the listeners and of the critics here in Italy and probably in the whole Europe. This possibly happens because he has never been a man who was actually into mainstream music (when it happened, he regretted it, ‘We didn’t want no MTV/We didn’t want know VH1/It was a time so long ago/Yeah, we had some fun’, he sings in an elogy to the parable of the Wall of Voodoo into a song contained into his solo album, ‘Snakebite’) and in this sense he is a true indipendent and free artist, someone who is out of every possible scheme and because of this also some way ‘censored’ by what I usually define ‘mainstream’ critics. In this sense we could probably make a comparison with what I recently wrote about Jad Fair, because we are talking about two artists and singers and songwriters who have always been very productive and that still continue to make good music and great records, but for manys this apparently it’s not happening at all and that’s a pity, because they’ve of course still a lot to say and like old buccaneers, they are much more able to sail stormy seas nowaday than they were actually in the past. With Stan Ridgway in particular, then, I have a special kind of relationship. I mean. I’ve never met him and I don’t actually know him personally, but for what was just a coincidence, he is a point of reference for me (both as a listener than as a musician) from when I was still a teen-ager and when, used to listen to mainstream music like grunge or British pop, I borrowed from a friend of mine who was actually much older than me (this actually happened in the second half of the nineties) a cassette of ‘Pornography’ by The Cure and, well, the incredible thing it was that on the other side there was Wall of Voodoo’s ‘Call of the West’. Didn’t know a fuck about them and I listened to that album just for a case but, well, you know, it was a great moment for me, I also was just starting to play guitar. It was just magic and – of course – it is still nowaday one of my fav records at all. No way.

Apart from this personal premise, through the several years I always have tried to follow what are the tracks and the footsprints left by this man all across his career. Unfortunately much of his releases are actually very hard to find and I sincerely am not able to make what you would define an his own reasoned discography. Also if of course in this sense Intenet helped and helps actually a lot, because it in many occasions could give you the possibility to discover or to rediscover old recordings that are possibly difficult for evident reason to obtain with any other possible channel. A thing that on the other hand does mean that things for Internet work also in the opposite verse. If you’re an artist, a musician, a singer and a songwriter, you could use Internet to easily publicize and spread your works that in other cases weren’t going to have a great diffusion and possibly to be forgotten or even to get definitely lost.

So, probably also for this reason, in the last six months Stan decided to release three new albums – three – containing different materials which was actually previously unreleased. All of these records were actually released only on a digital format and they are actually avalaible also for now in unlimited streaming version via bandcamp. The last episode of them it’s ‘The Complete Epilogues’, out on December 2016 and containing a collection of songs from the recording era for the album, ‘Neon Mirage’ (2010)’, and sequently not included on it, a part than exclusive itunes singles, song covers and stray classics (traditionals ‘Wayfaring Stranger’ and ‘Moonshiner’, ‘Deportee’ and New Year’s Flood’ by Woody Guthrie, ‘Dindi’ by A.C. Jobim and ‘Song For Woody’ by Bob Dylan) , live performances, studio experiments, song demos and what Stan himself defined as ‘the poignant, melancholy masterpiece, ‘Over My Shoulder Somewhere’ – inexplicably left off of ‘Neon Mirage’.’ In practice a kind of special gift out on the occasion of Christmas festivities, if you want to consider it that way.

The previous two releases came out together on August (following the release of the last LP, ‘Mr Trouble’, out in 2015) and both of them saw Stan making his comparison on bandcamp (in practice an intent to open up ‘a greasy spoon diner or art monster’s commune with old rusty tin tuff sheds out in the harsh hot desert sun’ for hungry and lonely old men flagged down on Interstate 15) and releasing materials along with female singer and songwriter from LA, California, Pietra Wexstun, who is actually his wife, a part than the leader of the arty, futuristic cabaret band Hecate’s Angels. ‘Ridgway & Wexstun Summer Collection’ contains actually songs and materials from several of their most recent albums and releases. ‘Priestess Of The Promised Land‘, on the other hand, it’s an album of all unpublished materials and new songs composed by the duo in 2016 at Venice, California, and mastered at Mulholland Sound by Doug Schwartz.

Like it always happens with any other of his releases, ‘Priestess Of The Promised Land’ it’s what we could consider as a musical voyage along that same old road signed by the influential beatniks Jack Kerouac and Neal Cassady across that great country that’s actually the United States of America and in particular this case highlighting that microcosmos which it’s actually California and the reality of Los Angeles, which Stan Ridgway is able to depict as usual in darkly humorous and richly cinematic musical tales, noir tones and hard-boiled style references.

The albums actually contains what themselves defined as ‘new directions music for your listening pleasure’: music and songs, soundtracks for film, electric experiments. A great storyteller in the contemporary American music, Stan opens the album with ‘Priestess Of The Promised Land’, one of the new songs, a rock-blues ballad in the style of one of the band which had possibly much more than the others influenced him, The Doors. Accompanied by the sound of the organ and with that western cinematic approach typical of his ballad, the song it’s a sunny and at the same time rusty ride on the glorious soil of California. 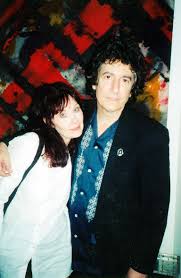 ‘Blue Oceans At Dusk’, the second track, it’s the first ‘new music for film’ present in the album. Inevitable in this case to make a comparison to atmospheres typical of David Lynch’s movies. An artist that on the other hand I really want to put near of him and a song this case it’s like to walk slowly alone on the surface of the moon and looking with nostalgy to an abandoned Earth. A certain sci-fi cinematic atmosphere that it is also reprised by the song, ‘Nightworld’, where atmospheres similar to the ones of the classic sci-fi masterpiece, ‘Dune’, combine with triumphalistic and epic fanfara of peplum films. ‘Error In Judgment’ reprises on the other hand much more classical drama themes which has got something of French movies combined with noir jazzy atmosphere and hallucinate Californian psychedelia.

‘Pirates’ it’s actually a remix of the Hecate’s Angels song contained in the album, ‘All That Glitters’. The song it’s played in the typical style of the band, reprising dark elements and that crazy no-wave mitteleuropean cabaret style which Pietra is able to characterize with her particular way of singing. ‘Half Way There’ it’s an alternate take from Stan’s album, ‘Neon Mirage’, one of his best works released in the last years, a folk dusty ballad here re-arranged in a very concrete style similar to that one adopted by Johnny Cash (another one of Stan’s main point of references) into his several, ‘American Recordings’.

But of course the much more interesting episodes could eventually be the new and previously unreleased songs. Yet mentioned about the title-track, both ‘Slippin’ Sideways’ than ‘All For Love’ reprised some moments of Stan’s career. The first one sound a lot like it could had eventually be a song contained into the album, ‘Big Heat’, with that typic rhytmate thrilling proceeding and an ending in Wall of Voodoo’s style western fascination. ‘All For Love’ it’s much more what I would define as a crime-jazz ballad,a song made to be listened walking without wearing any shoes and trying to not making any sound if you don’t want to be downed by law. 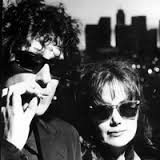 Stan Ridgway is always the same noir troubadour and sound alchemist we learnt to know listening to his previous releases starting from Wall of Voodoo to ‘Mr Trouble’ or eventually because reading Raymond Chandler, beatniks literatures, watching movies by David Lynch or Quentin Tarantino or Director John Carpenter, one who has probably grown up with the same culture than Stan and built up his entire career on the concept to see musics and imageries as a unified things and because of this he always worked himself to the soundtrack of his movies. Original contents, despite he is not proposing particular innovations into his sound, there’re of course also into this release, but how it could be different? We are talking about a songwriter and a storyteller who his view into space and time has got not limitation at all. He has got a far view, the eyes of an eagle and they travels all across the United States, flying over the desert or switching across the much more remote streets and corners of the City of Los Angeles. Who knows. Probably it is because he is a storyteller and at the same time what at this point we could also define as an hallucinate folk traveler that he is not so popoular as his greatness into writing music wanted him to be. Despite this, sometimes it happens that there’re people who are able to fly on eagle’s nest and that could be the reason why he was awarded last year with the ‘Premio Tenco’, in practice the much more relevant recognition in Italy for songwriters. Something, this award, who really surprised me and that came later his collaboration with Italian musicians like Luca Faggella and Giorgio Baldi and the demonstration, for me who I’m Italian, that despite what we Italians ourselves are used to say, we have still got a good taste.