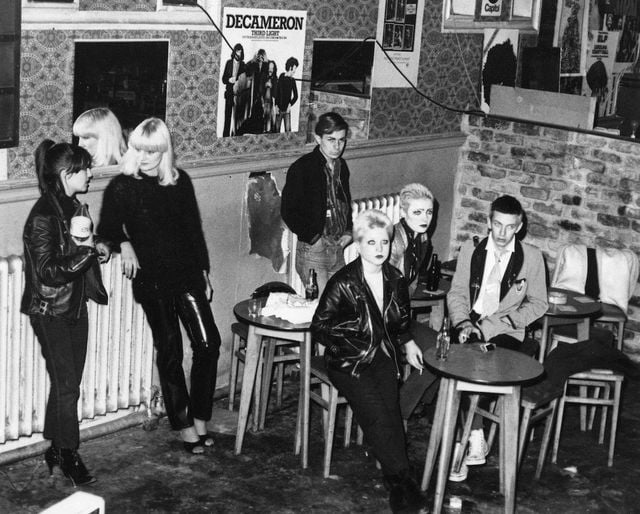 Louise’s and Sombrero in Soho are the clubs where Soul Boys, new Punks and Drop Outs meet waiting to turn into punks. Especially at Louise’s which is the most mythologized afterwards. The Sex Pistols begin to attend him from the earliest times, when they have done like 5/6 concerts and are available and friendly with everyone. Situation of the kind that no one in town knows about them but the guys at Louise’s have watched all those 5/6 gigs and idolize them. It’s that situation where you have your artists at your disposal that you can talk and fuck with, that you know are huge, but for the moment only you know it. One night Sue sees Malcolm. She approaches him and says, “I know you’re organizing a punk festival at the 100 Club. Can I come and sing?”. Sue has on only her panties, garters and bra with her tits brought out of it. You have all seen the photos. Malcolm replies that: “certainly”. In those days it works like this. Now it’s about forming a band that should initially be: Sue, Steve and Billy Idol. Then the concert must be Monday or Tuesday but the previous Friday Billy calls that he cannot attend because Tony James called him suggesting he not attend so as not to damage Chelsea’s image. Then they call Marco Pirroni and Sid Vicious on drums. Sid answers this “I don’t have a shit to do anyway.” Then jump on Bernie who sends them to try in Camdem where they try Clash and Subway Sect. Try! They really have to write the songs !!! In short, Northern Line, they jump off the train, little walk up to Camdem Lock and find the beautiful tools ready. They start messing around for like 20 minutes then Sid stops the noise he is causing and goes: “that’s enough. Don’t we want to learn how to play these fucking instruments and lose the spontaneity ?!”