Some months ago, it was about last May, I kept into this young beautiful girl. We started into talking and there were evidences that between us there was a sexual actraction. So inevitably we mess around and it was for sure the best fuck I’ve ever had. Then for the last period for sure. I started swearing her and her body was there and there covered with tattooes, when she told me, ‘Take off my panties and I will show you another one…’

It was a writing. ‘Love hurts.’ Not the most exciting things to read when you’re going to fuck someone and something in which I generally don’t believe, but ok I have to admit that at the moment I didn’t give a fuck to this and I went on fucking her. It was a good night, standing at my standards, because it happened two or three times before I felt into a deep sleep.

After that we started a relationship. I couldn’t actually say if we were engaged or not, but this is not important. Everything seemed working fine. Appearently. Because, to tell the truth, as the time was passing by, so I was feeling much more agitated. She was good. She was a good girl, she is actually a very good girl, she’s ok and I enjoyed passing time with her, so what actually didn’t work it was just me. It had just to be relate to myself.

It’s used to say that if you’re in trouble with yourself, you won’t be able to have a relationship and to love someone else. Don’t know if this is true, it is my opinion to be honest that this saying it’s shit. What happened in that case it was that I couldn’t actually comprehend what they were actually my sensations. I’m always been a lone wolf and I felt like I was unable to understand what was actually happeninh. Finally I wasn’t have a good time and because I’m always used to never hide what I think to the others, I tried to explain to her what were actually my feelings. The result it was that she now doesn’t want to see me anymore, she appearently was really upset. I understand her for this reason, because if I was unable to explain to myself what it was actually happening, how could I be able to describe it to her.

Time has passed since that moment. Don’t know if I really have figured out what’s happened. I’m not rancourous with her and I possibly don’t miss her, but neither I’m feeling fine because the truth in the end it is that I’m uncapable to interact with the others, to have a deep interaction with another person, it doesn’t care if we are talking about women or men. But despite this, fuck, I’m still certain that love doesn’t hurt. ‘Love hurts.’ That’s actually shit. Believe me guys. I’m not a kind of prophet, I’m just a motherfucker who takes drugs and really likes to drink beer and smoking cigarettes. I write sci-fi novels that will never be published and my musical project it’s never going to get to a point and this is probably because the same reason why I am not able to get into deep relationship with the others. Because I’m not able to love and love it doesn’t hurt, love it’s the best powerful thing, but on the other hand if we really want to be honest with ourselves and with the others, we couldn’t ignore the fact that love is fundamentally hard. 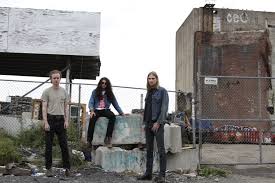 These guys, Honey, they’re actually a trio (vocalist and guitarist Dan Wise, vocalist and bassist Cory Feierman, drummer William Schmiechen) coming out from the fascinated New York’s burough of Brooklyn, New York. ‘Love Is Hard’ is the title of their debut album, out via Wharf Cat Records last May, and their sound it’s an explosive mix of garage, psych and punk music and attitudes. It isn’t hard to find what are actually their influences, knowing then that Dan Wise it’s used to play with Psychic Ills and Schmiechen it’s actually a member of Amen Dunes, two of the most interesting band of the neo-psychedelic movement.

By the way, if the beginning principle are the same, the result it’s rather different. Honey themselves admit that their main influences are the ethernal Iggy and The Stooges and the experimental rock of bands as Swell Maps and Spacemen 3. The sound of the album so it’s in the intention a good mix of what are the sonorities of these three great band of the past. Effectively going on and on listening to the records, you could notice as the involving and hypnotic stoner sound of ‘Comes Down’ it’s typically psychedelic and spaced out in the style of the band formed by J. Spaceman and Sonic Boom. A very trip in space that broke out what someone could possibly define (without reasonable issues in my opinion) a monotony records.

The most part of the songs refers to a tradition into garage music started from the beginning of this millenium and then developed into the last ten years. ‘Taking a Ride’, ‘Born’, especially ‘White Noise’ has got something of the early Black Rebel Motorcycle Club because of that bluesy garage sound that watches to the most experimental episodes in garage music of the United Stated during the sixties. ‘MFLH’ pays the devotion of this ensemble in the confront of their master Iggy and The Stooges and ‘White City’, the last track of the album, it has got something of the punk music of the Ramones.

Appearently so there’re so many different contents in this record, but the concept it is unique and there’s a sinister atmosphere that pervades the entire project and that you could feel since from the first track, ‘Monk’, that it was actually also the first single by ‘Love Is Hard’ and out in April, it was presented by a video directed by Frank Haines and with the ’80 years young’ Chris Kachulis. The video and the song, the best track of the album, there were actually no better possible opening, talks about a monk who as a sort of Jim Jones invites the listeners to follow and to be completely devoted to him. It invites the people to give him what we could define not only a complete faith a devotion but what it could appearently seem love. ‘Everything I do, I do it for you, because I’m a monk!’

But love is hard and you could simply understand this and giving a sense to ‘love’ giving it to someone, to what could actually appear to you as a ‘Monk’, a guide, a font of inspiration. As ‘Dan Wise reported to a previous interview, ‘Noone could explain why love is hard. Love is hard to find, hard to get, hard to keep. It’s just hard.’ And this is actually because many of us feel actually completely lost in the nightmare that surround us all around outside and inside our souls. Love is hard, you can’t have and you can’t give it without seeing the light into all this shit. In the meanwhile you’ve the old fucking rock and roll. And album like this of course. And rock and roll, listen to me, it won’t give you any answer about your life and also about love, but it could make you do the first step into interacting with the others and possibly feeling then everyone the same.

It’s the same old fucking story. ‘Jenny said, when she was just fine years old, you know, there’s nothing happening at all. Every time she puts on the radio, there was nothing going down at all. Then, one fine morning, she puts on a New York station. She couldn’t believe what she heard at all. She started dancing to that fine fine music. You know, her life was saved by rock’n’roll.’ Bless you guys.