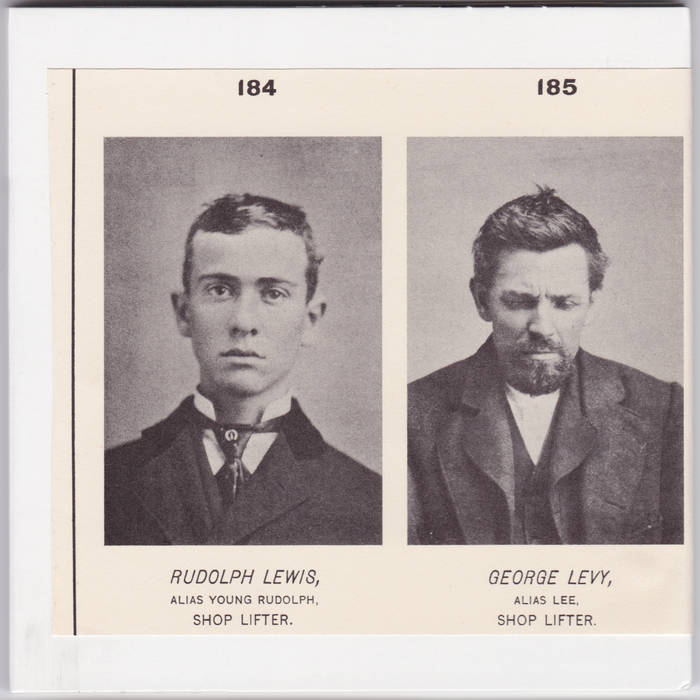 Description. Twenty-one years old in 1886. German, born in the United States. Single. No trade. Slim build. Height, 5 feet 8 inches. Weight, 130 pounds. Brown hair, hazel eyes, sallow complexion. Three dots of India ink on inside of left fore-arm. Large ears. Record. Young Rudolph is, perhaps, one of the smartest young thieves in America. He has just started out, and from his career so far he is calculated to develop into a first-class man. He is pretty well known in all the Eastern cities, especially in New York and Boston, where his picture is in the Rogues’ Gallery. He is an associate of Frank Watson, alias Big Patsey, Little Eddie Kelly, Jack McCormack, alias Big Mack, and Charles Lewis, all notorious east side. New York, thieves.

Record. Lewis was arrested in New York City on September 22, 1883, charged with stealing a piece of silk, valued at $100, from the store of Lewis Brothers, No. 86 Worth Street, New York. He forfeited his bail and went to Boston, Mass., where he was arrested for shoplifting, and sentenced to eighteen months in the House of Correction, on November 19, 1883, under the name of Rudolph Miller. His time expired in Boston on April 25, 1885, when he was re-arrested on a requisition, and brought back to New York, to answer for the larceny of the piece of silk.

Lewis pleaded guilty in the silk case, and was sentenced to two years in Sing Sing prison, on April 3, 1885, by Judge Cowing. His sentence will expire on December 30, 1886.

Young Rudolph’s picture is a good one, taken in September, 1883.

Record. Levy is a smart sheeny shoplifter and sneak thief, who has been traveling through the Eastern cities for years. He is as liable to sneak into a bank as into a store. He is considered quite clever, and is pretty well known in all the Eastern cities, especially in New York, where he has served time in State prison at Sing Sing, and in the penitentiary on Blackwell’s Island.

He was arrested in New York City on June 7, 1882, for the larceny of $24 worth of Japanese articles from the store of Charles W. Fuller, No. 15 East Nineteenth Street. He was tried in the Court of Special Sessions, in the Tombs building, on June 12, 1882, and discharged by Justice Murray, who was ignorant of his character.

He was arrested in New York City again on September 9, 1885, in the fur store of Solomon Kutner, No. 492 Broome Street. Mrs. Kutner noticed that a light overcoat that he carried over his arm was much larger than when he entered. She shut the door, and stood before it. Finding himself locked in, he threw the bundle to the floor, seized the woman, and pushed her to one side. He found that he had been foiled again, as she had taken the key out of the door after locking it. Mrs. Kutner shouted, and her son and husband held Levy until an ofificer arrived and arrested him. The property he attempted to steal consisted of a sealskin sacque, valued at $170; two pairs of beaver gloves, and a roll of satin lining. Levy pleaded guilty in this case, and was sentenced to three years in State prison at Sing Sing, on September 21, 1885, by Judge Cowing, in the Court of General Sessions, New York.

Ok. When ‘Skeleton Tree’ was out, a few months ago, a couple of months ago I guess (in September), many people got perplexed or – more than this – very disappointed because of its contents and the sonorities of the album. Who kept into the listening of this record, of course, noticed that it is what we could surely define a unique episode in the career of the singer and songwriter born in Warracknabeal, Victoria, Australia. The reasons of this are evident and have also got inevitably to do with the tragical happening into his private life lasted last year. Something that actually don’t require any kind of consideration but that possibly influenced and was determining later than in what are actually the lyrics also in what are the particular sonorities of the album, objectively different from anything he proposed before.

So, appearently, far to enter into any kind of discussion about this – I mean, if you don’t like it, just leave it – it seems that a lot of people really needed and need actually to listen to some fucking noisy rock blues and to dirty fucking murder ballads in a style that, innovating an ancient tradition that has got its distant roots into what were the Mississippi River blues and the popular Americana folk with elements of the rock and roll and the disturbing noise lesson of the no-wave and of the anarchistic mitteleuropean rumorists movement, a late revoltous reprise of the German Expressionism Theatre, finally became that great experience which was and still exist nowaday of Nick Cave & The Bad Seeds.

Of course I’m far to make a comparison ‘bout the quality of the writings of Nick Cave and the one of this group, Endless Boogie, the American rock band out from Brooklyn, New York, are not surely known because of their lyricism, guess really they actually don’t give a fuck about this. I’m also out from any willing of considering the quality of the sound as it was actually the same of The Bad Seeds, an ensemble that because of the great qualities and personality of every single member, has got probably no equals. But, despite all of this, I would surely suggest to everyone of all this orphaned child of the fucking electric rock blues genre to stop complaining on their own and to give a listen to this Endless Boogie’s release.

‘Nothing For The Water’ it’s actually not a new LP (the last one was actually out in 2013 via No Quarter Records, ‘Long Island’, possibly the highest point of their career speaking about notorieties). I mean, it doesn’t contain any new songs and it’s what we could define a special release, a CDR the band made in the occasion of their last European tour in a limited edition of 250. It contains unreleased material recorded in a space of time longer than ten years. 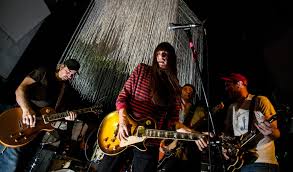 Yeah. Of course you will probably consider this episode as a marginal release, something actually don’t necesseary need your consideration. We’re talking about some studio stuff (reheasals recorded in the 2008-2009 period, alternative takes out from the ‘Full House Head’ sessions), some live stuff and ‘some jams from the dungeon.’

If you know this band, you have probably understand yet what you’re going to listen to. Endless Boogie took their name from the 1971 album of the American Blues singer and guitarist John Lee Hooker, one of the most prominent figure of electric guitar-style adaptation of delta blues, one of the father of the talking blues, who developed his own driving-rhytm boogie style. The Guardian described their sound as something being somewhere between a John Lee Hooker drawl and a Captain Beefheart honk. Their style it’s a compendium of the big lessons of band like ZZ Top, inevitably Iggy and The Stooges and the fucking The Velvet Underground. With an eye of regard of course to the kraut-rock sound of Can and Amoon Duul, I would define Endless Boogie like they were ‘Metal Machine Music’ played by John Lee Hooker and with that willing of ‘blues’ (where blues it was actually not just a genre but a true state of mind, a fucking dimension, a true culture) and freaky rebellion typical of the early Stones.

Including a version of ‘Hispanic Minority’ with the presence of Mr Stephen Malkmus at the guitar and with an incredible version of ‘Rollin’ & Tumblin’ recorded live by Ethan Miller in New Jersey earlier this year and longer more than fifteen minutes, I’m not a motherfucker if I would say that standing at my considerations, this is not just their best release at all, but – properly because his strange and weird nature – also one of the greatest release in rock and roll and garage blues of this year 2016.

Guess someone would rather say that they didn’t actually sound in a way similar to Nick Cave and The Bad Seeds, but if you make this kind of consideration, you’re probably forgetting where Nick and his old bandmates are coming from. They played the old blues of the Mississippi river, Nick Cave and much more than him (you probably wouldn’t expect this) Blixa Bargeld himself was and actually is a great fan of The Rolling Stones (but ok, who doesn’t like them) and he has always been fascinated by the Americana music tradition. Nick Cave, again, at a certain point of his career, when he and The Bad Seeds started changing their style becoming less noisy and bluesy than before, started Grinderman because his willing to sound definitely rock and roll and garage. And ‘Grinderman” was another homage, this time to Memphis Slim and his song, ‘Grinder Man Blues’.If apparently Endless Boogie and The Bad Seeds play different, they have got the same attitude and this is what really counts. 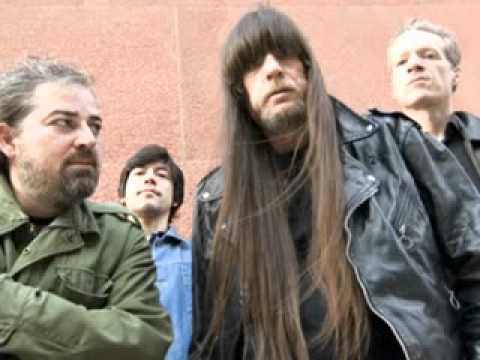 Why is this so important. The history of the blues and the history of the USA, they are in a certain sense a metaphore of the history of the mankind. And the history of the mankind it’s an history of violence. Look at what actually made musicians like Hugo Race, Chris Eckman, Chris Brokaw (Dirtmusic). They got looking for the truth about the origin of the blues and they found it finally in Mali, in the heart of Africa. And it was the same place where the humankind actually came from. And when you left finally the place you came from and you do it because you’ve got no other possibilities and perhaps you also know that you’re never coming back, you’re always going to left something on your back. You got privated of something that actually has to do with your true nature. You’re the victim of an act of violence and when you’re touched down by the hand of the devil, you’ve got him inside into the deep of your heart. Look at the cover of this album. Rudolph Lewis, alias Young Rudolph, alias Rudolph Miller. Shoplifter. George Levy, alias Lee. Shoplifter. Again.

Thomas F. Byrnes served as head of the New York City Police Department from 1880 until 1885. He was born in Dublin, Ireland, and immigrated to New York as a child. He became detective bureau chief in 1880. In four years he increased the detective force and made 3.300 arrests. He obtained legislative approval of changes in the department which gave him immense power. He instituted the ‘Mulberry Street Morning Parade’ of arrested suspects before the assembled detectives in the hope whey would recognize suspects and link them to more crimes. He published a book, ‘Professional Criminals of America’. He built up a book of photograph of criminals, the ‘Rogues Gallery’. Byrnes’ brutal questioning of suspected criminals popularized the term ‘the third degree’, which was apparently coined by Byrnes. From the descriptions, the third degree as practiced by Byrnes was a combination of physical and psychological torture. Standing at many commentators he was the man who invented America’s modern detective bureau.

Thomas F. Byrnes was an evil man. He too was touched down by the hand of the devil, and his history was an history of violence, that he pretended to document himself with his book. If you close your eyes, while you’re listening to this record, you would probably see him, a disturbing image of this insane man while he was taking the photographs of those criminals and scheduling them into his fucking archives. A testimoniance of his brutal insanity.

‘May God bless the Americans we lost this morning. May He comfort their families. May God continue to watch over this country that we love.’ President Barack Obama.