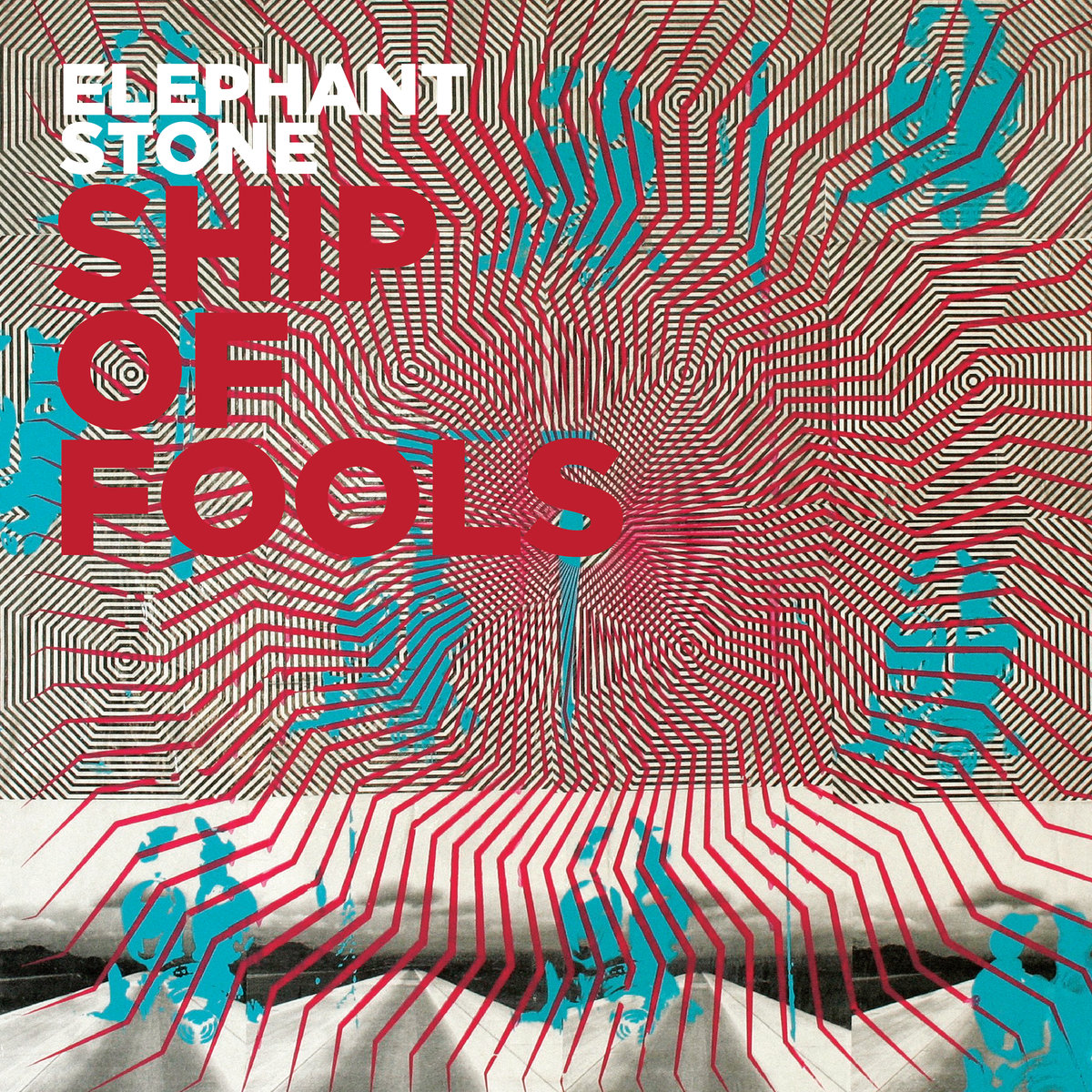 Elephant Stone, the project Rishi Dhir it’s getting on since 2009, has got for me always something umpredictable. Since their debut, with the psychedelic LP ‘The Seven Seas’, that I actually really dig a lot, they always went on changing and re-modulating their sound and their style (something that to be honest happened to Rishi also with his previous project, The High Dials). The following two albums, ‘Elephant Stone’ and ‘The Three Poisons’, were two albums full of contradictions and in which, to be honest, especially for the second, possibly a failure in my opinion, it was in practice impossible to find a common ground and a main sense to the product. Wait. I’m not saying you always need to make a concept album, I don’t give a fuck about this shit, I’m just saying that it was like the band hadn’t got an its own identity. It’s not much a matter because of the qualities of the songs, some were actually good, some definitely not, but that’s not the point. The sensation, definitely, it was that Rishi and the other members of the band had not any fucking idea of where they were going. 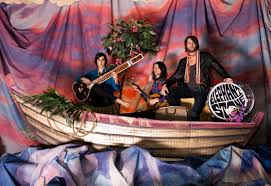 Wait for a moment now. Before I’m going to introduce this new album, let me say that despite all of this, I consider Rishi Dhir firstly a very nice person, I met him personally and he was very nice and friendly, and this could be enough to define him for my point of view, but he is a very good musician and multinstrumentist indeed with some brilliant ideas that also made him been appreciated and as consequence get him into collaborations with artists like Anton Newcombe and The Brian Jonestown Massacre, Dandy Warhols, Beck, The Horrors, The Black Angels (Alex Maas also sings in this album, in the song ‘The Devil’s Shelter’). Apprecciations he obtained through the years because he is a very brilliant musician and an innovative one. Originally from Montreal, Canada, but with evidences of his Indian origins, he is a brilliant sitar player, a dilruba player and an armonium player and his compositions have always been known because the use of the tablas and generally because he was used to use all this instruments to give to his music a sixties psychedelia effect that was very effective and later he also introduced these into his songs, despite the fact going on and on Elephant Stone became something different from what we could actually define just as a psychedelic group in which Rishi tried to explore Indian music and melting it together with sixties classic psychedelia.

Elephant Stone, in fact, is not just simply a project mainly inspired from sixties psychedelia, Indian culture and taking the name from a song by Stone Roses. Getting through deep changes into the last two albums, Rishi Dhir, guitarist Gabriel Lambert and drummer Miles Dupire-Gagnon, finally approached to what we could define a their own and well defined style.

Anticipated by an EP, ‘Little Ship of Fools’, which contained four songs later part of the LP, Elephant Stone released their fourth album last 16th of September. Originally avalaible only in a digital format, ‘Ship of Fools’, will be available in physical copies from the 25th of November via Burger Records.

‘Ship of Fools’ it’s an album that has got many several influences, probably also because the many different collaborations Rishi Dhir had through the years with artists many different one from the other, but more than this I guess also because he wanted to produce something that was much more on the point than psychedelic-music and do something that at the same time it’s much more commercial, but possibly also more experimental and charming.

It’s not a case in this sense that the album was produced, recorded and mixed by Marcus Paquin, previously yet at work with notorious indie-rock band as Arcade Fire and The National, and the man who guided Rishi Dhir and the other guys into this work and finally make them realize what were actually their proposal.

I listened to it several times, because listening to it there was something for difficult to comprehend, and the fact it is that definitely now Elephant Stone had become a true pop band. An experimental pop band, influenced also from what they did previously, and with a lot of use of drum loops and synthesizers.

So, Elephant Stone finally are walking across a line yet signed from others band in the last ten years. Think about The Strokes, Kasabian or Tame Impala, band which had a success significant more bigger than Elephant Stone and that also modified their sonorities orienting themselves over and over through much more electronic and pop dimension. Since from the first track, the single who also anticipated the album, ‘Manipulator’, we have to do with captivating rhythms and sonorities with the electric distorted guitars and synthesizers dominating over the rest of the instruments and the massive usage of choirs and refrains. But this is a constant of the album. Listen for example to ‘See the Light’, ‘The Devil’s Shelter’.

Very relevant it is the contribute of vocalist Malika Tirolien that in practice sings in ‘Manipulator’ and also in the eighties electronic music-styled ‘Where I’m Going’ and ‘Cast the First Stone’, in the evocative ‘Run, Sister, Run’ (which in some parts make me think to Pet Shop Boys!) and in practice it’s the first voice in ‘Love Is Like a Spinning Wheel’, a song that if it was out thirty years ago it was probably to be an hit and to be at the first place in every classification. Bernie Sumner and Peter Hook probably would like it and this could possibly be the only point that will see the two agree on something at the moment.

‘Andromeda’ is possibly the much more elaborated song of the album, an experimental psychedelic ballad with the contribute of Shawn Mativetsky at the tabla. An instrument which it is also dominant in the Beatles’ inspired ‘Silence Can Say So Much’, that opened with the use of the sitar and the tabla to later expand into a much more wide and expansive cosmic dimension.

The album, finally, end with ‘Au Gallis’, written by Rishi Dhir with Gabriel Lambert, who also is the first voice in this case, a mix of drone experimental music with electronic suggestions in the style of Daft Punk. Something that explained in words could possibly have not sense at all and this is because I suggest in any case to give a listen to this album.

There’s plenty of ideas into ‘Ship of Fools’, a title which is surely misleading because it immediately could make you think to The Doors, but of course it has nothing to do with Jim Morrison, Ray Manzarek and the others. A very sophisticated and ‘chic’ album, that has got also reviews and appreciations on popoular magazines like Rolling Stone and that possibly introduces Rishi Dhir and his band into a new dimension and will probably also give them a much more listeners and followers, but also an album that me personally I’m not able to appreciate in every its part. I like the fact they experimented a lot, also trying to making something original and different not only from what they previosly did but also from everything else, I mean, they also tried some way to mix world music with pop music in a different way from the others, but the final result it’s obviously not so original, but this not for their limits, but you couldn’t be at the same time original and much more easy-listening and this despite you’re experimenting. You can’t have it all and me, I guess I’m too much rude and too less sophisticated for all this. Not exactly dressed for it, definitely.

Vote: 7/10
@sotomayor
Bandcamp
You can also read this review at machchapuchchare
Post Views: 598
Precedente Willie Nelson - For the Good Times: A Tribute to Ray Price (Legacy Recordings, September 16, 2016) Successivo Heaters - Baptistina (Beyond Beyond Is Beyond Records, August 05, 2016)