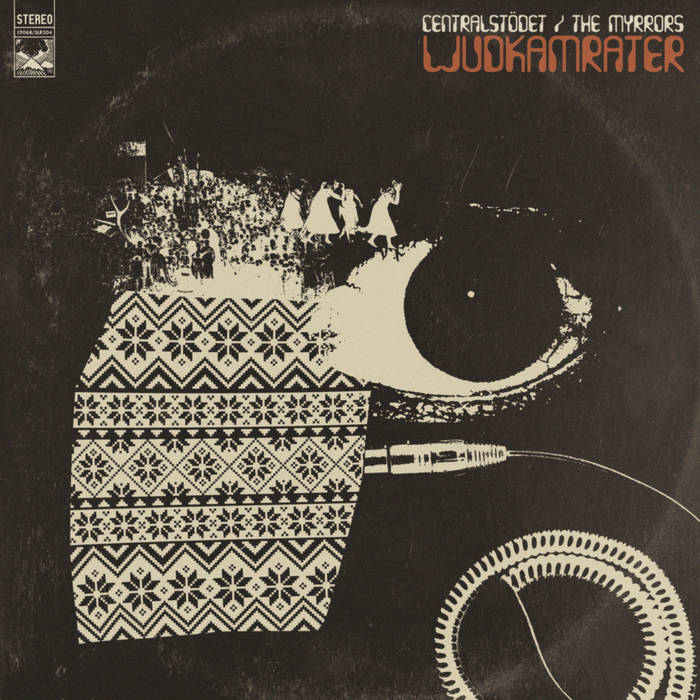 After so much rumor and long wait, finally comes the split album by the Swedish prog-rockers Centralstödet, occupying the A side with three songs and the amazing Tucson, Arizona’s community, psych, mystic rock ensemble the Myrrors.
The initial “IE” and “Yttre Hybriderna” constitute two movements of a continuous musical flow, full of mystery and rich energy of improvised music.
The guitars are fluid and sinuous, the basslines, lithe and moderately fuzzy, are ennobled by vintage amplifiers. It is the new experimental progressive, the true progressive music, that is not reflected in itself, but floating in space chasing the supernovas at the turn of the radio frequencies of the guitar, evocative music that encourages saving introspection, exciting meditation of unknown territories of the body electric. Music that analyzes the mind and scans the body with its dilated notes putting the individual at the center of the Universe, as atomization of the infinite and, therefore, able to sing and exorcise the darkness that surrounds us. The music of the planets, the tuning fork of space storms that vibrate investing the stars.
“Vegas Bodega” is drunk with angular and atonal sounds and brings to mind the unrivaled Scritti Politti, the very first ones infatuated by Marx, who in the cover of the first 7” wrote the costs incurred for make the single, so as to encourage other kids to make music.
Canterbury flavors, minimal funky rhythms, experimentals music where sometimes there is carried away without knowing where it will end as it is so nice to get lost in this sea of ​​electricity with the guitars and the drums that get harder, almost loosing themselves.
The Myrrors are beyond, they are sorcerers, they are healers occurring at a challenging and evocative music, ritual and primitive, to alleviate afflictions and encourage the re-appropriation of numb conscience. They know the art to play the instruments telepathically and are not afraid of the static electricity.
“Rayuela / Night Flower Codex” lasts 19:54 but it is a missile. Pure divination experience, tribal percussion, rituals flute and cymbals, feeling of wild music, desert sand blazing mantra, the instruments take over the musicians guiding them, unconscious, to the impossible Nirvana. Zenith flows into a lunar sea of ​​peace lulled by inflexible and mystical drone music fouled by Popol Vuh reminiscences. Balance interrupted again by faint drum sounds, full of guitar effects supports the rhythmic construction of an ethereal architecture, almost diaphanous.
One of the most exciting albums heard in the beginning of this year.

Pre-order via Sky Lantern Records (US)