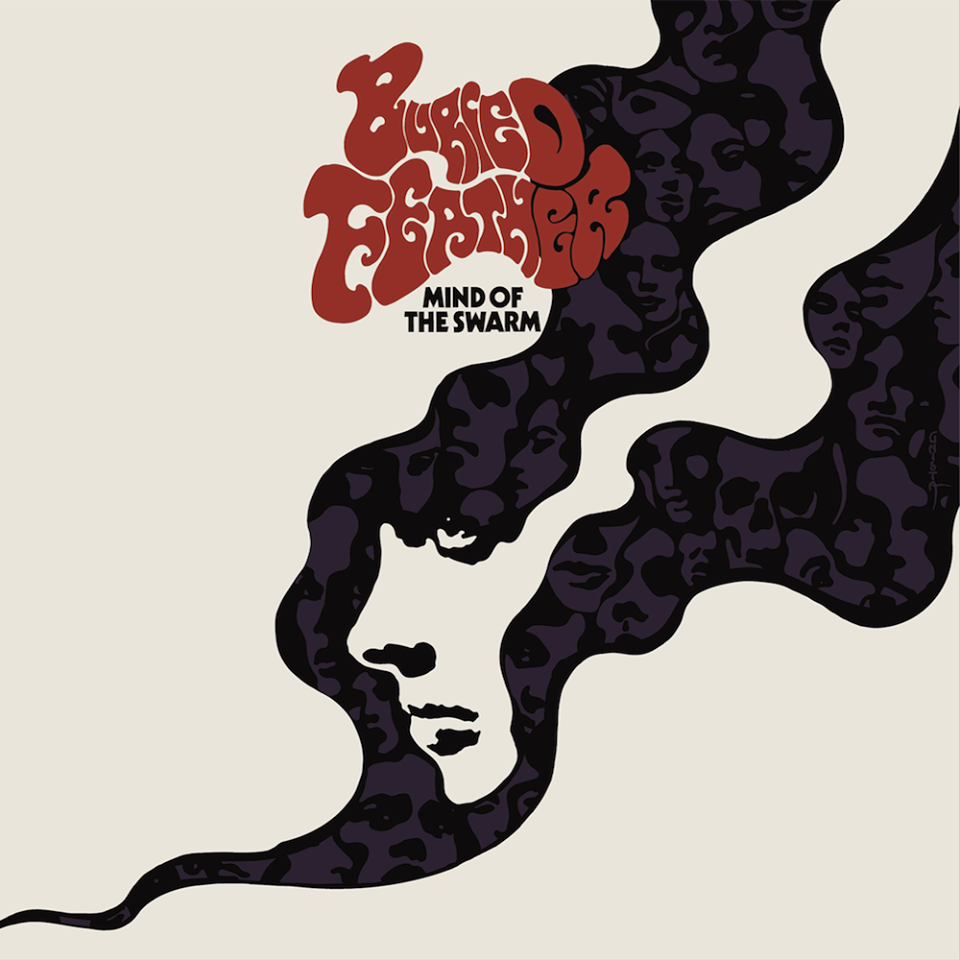 Melbourne outfit Buried Feather come out with the new album, which follows the self-titled debut dating 2013, which well impressed the Australian radio community.
An active concert activity allowed the three psych headz to create a considerable credibility and hone their inspiration to come to “Mind The Swarm” that was recorded in Melbourne by Paul Maybury (King Gizzard & the Lizard Wizzard).
The Buried Feather are masters of the stormy sound of the peculiar kind of heavy psych they produce with majestic guitars and relentless rhythmic sounds, possessed cymbals, heavy sonic flows that the three aussie psych dudes can always dominate without being carried away by the instruments. The sounds are subservient to the inspiration and you never get the feeling that the music takes over, leading the band in some sterile complacency territories.
The Buried Feather are able to express themselves through a broad palette of musical colors and are equipped with an eclecticism and a naturalness that is not easy finding in similar artists.
It is a kind of psych pop propensitie that forges the initial “Would I Miss You”, introduced and supported by a guitar gait with boogie flavors, where the sounds seem impetuous waves brushed and rippled by the desert wind heard in the strings of the Screaming Trees.
“Dust” follows with a lot of hypnotism, cosmic reverberations that seem to get in swirls of dust in the air, the searing guitar runs after the wah wah, dilated notes, lost in their own seriality, swaying of the head, close your eyes to find yourself in a different dimension. Slabs of fuzzed out psychedelic that flickers between the kraut-tinged drones and some late Detroit experiments, heavy and mystic solutions.
“The Stranger” takes life between murmurs and discordant guitars reaching a sinister celestial liquid wash of psychedelia. The guitar is free and the loud cymbals are lost in minimal repetitions.
“Mind Of The Swarm” is twisted acid, a kaleidoscope of cooled emotions exploding hit by jagged guitar solos.
In short, they are nine titles, one better than the previous one and it would be ridiculous to mention them all.
It is a deeply heavy psych, sinuous, delicate, desperate, and full of changing sounds, from the cheetah with a heavy heart full of napalm to the hell of boogie returning in “Sunshine”, from strenuous relaxation of the cosmic and druggy “Endless C” to the tireless and noisy guitars of “Regular Creep”.
“Well Wishes” closes the album with reminiscent movements of the space experiments by Marc Bolan, haunting sonic experience, which proceeds with feline step to get lost like a supernova in the firmament of the big music.
“Mind The Swarm” is a great album you will listen for long without any risk to get bored. To be honest, the Buried Feather amaze me, do not miss them.

You could get a hand numbered 180 gm virgin vinyl LP that, I am sure, will sound in the best way to get lost in its extreme dynamics.