I can’t help myself, false, means missteps steps, all you want, I’ll always like their records. May be it’s because of Ryan Lindsey’s voice, still out of indolence and able to withstand the numerous attempts to drowning in reverb whirlpools, will be itching spunky punk of the first album “Can not Get Past the Lips” the mid-tempo ballads, in Cars’ style, following the “Just Enough Hip to Be Woman”, the naïveté, the mess in their heads, the mess in mine, but the Bronchos are an irresistible pop sensation shacked with ethereal and disenchanting punk feeling.
“Double Vanity” seems the sum of the two previous recording experiences, as if they had decided to take all the energy of their faster songs, their immediacy, than slow down up to force them into avant-garde contours defined by a maze of different arrangements but homogeneous and functional to the project. Brilliant songs, talented guys who for the occasion seems to have managed to contain his temper with the help of some good glass of cough syrup. 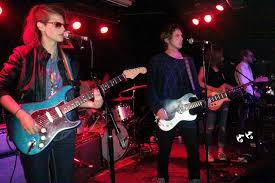 Homogeneity of the project  that someone could interpret as an attempt of survival of a band running out of ideas. Telling the truth it isn’t so, because it’s precisely that sound dirty, moderately slow, full of effects, always similar but never equal to it, which is the album’s philosophical center. Reflections of infinity, solipsism regression to narcissism, are the themes treated almost as an attempt to exorcise them. However, the Broncho not practice never to self analysis, don’t reach the estrangement of existential distress, but proceed with airy melodies and catchy choruses as if to say that they just showed how it could be sad without recourse to the miraculous power of their songs.

If “I Know You” seems to resort to certain insights of “Flowers Of Romance” to create rhythmic carpet, interspersed with trumpeting guitar, on which stands the monotonous voice full of echo, “Fantasy Boys” is a regenerating bath in the new wave more melodramatic and full of emotions over the top, gently lifts the skirt of an interlocutory Siouxsie of “Kaleidoscope”.
Anyway,  it’s necessary waiting for the third song, “I Know You”, to have something to pogo, but not as frantic as it was to Nashville or Rainbow, rather sweetly, impeded by, as did the people of Danceteria.
“Jenny Loves Jenae” continues in the same groove of charming indolence, repetitive and minimal percussion, and vocal harmonies that turn into lamentation full of glamour, excursions contained new wave flares.
The Broncho are adorable, to the limit and beyond Camp and the lactose intolerance. Ignore them if you want to hurt, I put them already in loop in my iPod. I couldn’t live without them.