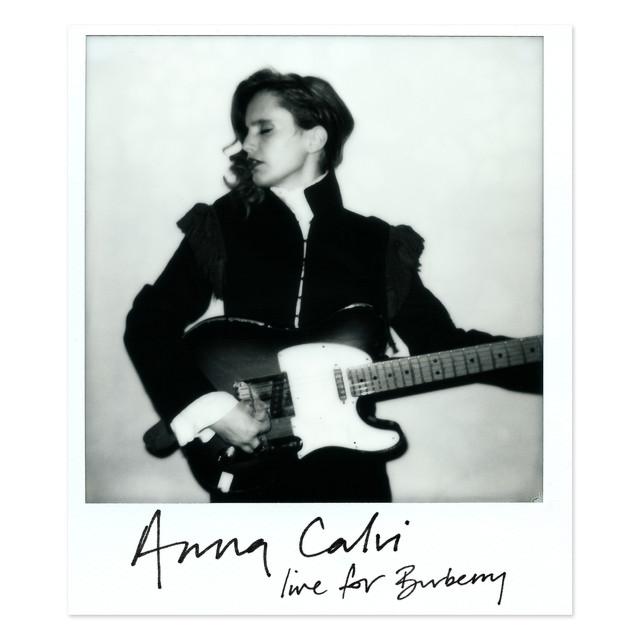 Not so much interested into her music, I kept into this EP released by Anna Calvi just to take litterally a break from listening too much to heavy-psych music like I’m actually doing these days. ‘Live For Burberry’ (out via Domino Recordings on February 20) is an EP containing five songs the English singer-songwriter performed live earlier this month at the Markers House of for Burberry, the British luxury fashion house headquartered in London. A context, the occasion of Burberry premiering its February 2017 collection for men and women, willing to be eventually discussed. In the sense that we could eventually find interesting to dispute about how much it’s willing to be defined like it was effectively art, music, when it is actually performed and/or conceived to be considered relating to fashion and moda. On the other hand we first have to consider that it’s not the first time Anna Calvi has played live into happenings of this kind, performing live previously and through the years for influential fashion trademarks like Gucci or Fendi. Not at all: Anna Calvi is herself what we could define as an icon into the world of fashion. So, second consideration, it’s not the first time and it’s not going to be the last one in any case in which fashion and pop music are actually considered into the same context and eventually they’re being the same thing. Not wanting to consider what are actually the major pop icons into the world of music, we could of course find the origin of the phonomenon into the introduction of the pop-art by Andy Warhol. In practice art movements that are considered relevant also into underground and counterculture contexts. On the other hand, to make a long story short, David Bowie, who is rightly acclaimed as one of the greatest rock’n’roll stars of all the time, is what I surely want to consider as one of the most influent pop icon of the last fifty years. He was so influential into music like he was into moda and fashion and that’s not a critic to this great artist, but what I have to define like a true fact. So. I’m just considering this release because of its contents and because of the qualities of Anna Calvi as singer and songwriter. Qualities that in my opinion are indisputable. Containing only five songs, performed live from a balcony overlooking the runway and accompanied by her band and members of the Heritage Orchestra & Choir, the set list included also a new track (‘Whip The Night’) and a cover of ‘iT’ by Christine and The Queens. ‘Whip The Night’, that’s actually the unreleased song included into the performance, it’s a reproposition of experiences from the cabaret and expressionism heritage of the Weimar culture and central into the artistic works of Marianne Faithfull, one of the main point of reference for Anna Calvi. Noisy arrangments and a theatral vocal performances gave actually to the song a dark fascination typical of certain post-punk episodes and approximately comparable to artists like Nick Cave and his Birthday Party. Atmospheres amplifiphied soon by ‘Nathaniel’, an instrumental expressionist track in which electric bluesy guitars and a dysharmonious organ create what’s litterally a art-errorist experience and obsessive sensations that connected to the world of moda make me think to the last movie by Danish director Nicolas Winding Refn. Talking of course about the suggestive and impressive ‘The Neon Demon’ out into the cinemas last year and starring Elle Fanning into the role of protagonist. ‘iT’ it’s actually a cover of the pop artist Christine and The Queens. I don’t know absolutely a fuck about her. So I’ve not listened to the original version of the song. By the way, this case Anna Calvi plays what’s actually a rock’n’roll seventies track into solemn tones and reprising some mitteleuropean atmospheres typical of certain unnatural and artefact manifestos by Lou Reed. ‘Eliza’ shows actually the duties of Anna Calvi as singer and songwriter. It’s what I want to consider as an elegant and classy song with a vintage taste and strings arrangments and with a crescendo and epic refrain. ‘Desire’ it’s another expression of her post-punk derived attitudes. An episode which claims to be also some way cinematic reprising impressions out from fifties and sixties black and white classic Hollywood film productions. Along the previous track, these two are the two in which the strings arrangments are actually relevant and what we could eventually be used to consider much more fit to a context like a premier of a fashion collection. Nothing it’s actually required to not be missed, but standing about me, I’m not too much into the music of this artist, an occasion to pay her some attention. Who knows if listening to her music into the future I will increase my consideration in relation to who is actually for sure a stylous artist and a great interpreter.