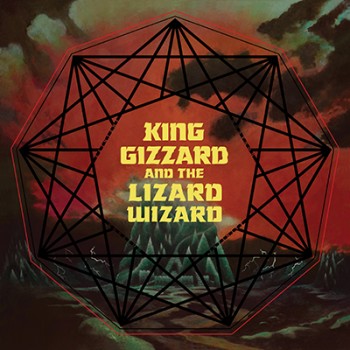 King Gizzard & The Lizard Wizard‘s eighth album in half as many years is yet another “didn’t see that coming” change of direction. Ditching the whimsical, flower festival vibes and acoustic niceness of Paper Mache Dream Balloon, Nonagon Infinity is KG&LW’s heaviest set to date. Moreover, the whole thing runs in a continuous loop as each track collides into the next and the record’s end links back to the beginning “like a sonic mobius strip”, as the band have described it. Fans who found the 16-minute Head On/Pill to be an epic journey (and we know you’re out there) will have their stamina severely tested on this rollercoaster.
The cartwheeling clatter of electric grooves starts with the frantic Robot Stop and continues unapologetically into Big Fig Wasp where Joey Walker protests that “insects grow inside my body“. Given the band’s rattling, neurotic performance, it’s highly believable. The production is rough around the edges as various instruments bleed into one another, which only goes to amplify the paranoid anxiety lurking within People-Vultures and the auto-destructive occult convulsions of Evil Death Roll, which has the potential to become a real live favourite. Given the absence of pauses and occasional deranged celestial conspiracy theory, ie. the universe has an invisible face, Nonagon Infinity ought to have a health warning that side effects may include physical and mental disintegration.

Don’t be surprised if this is the one they’re remembered for.